A Father and a few words 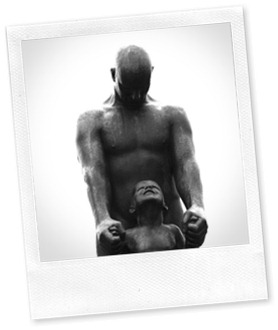 a father-in-law, stepfather, or adoptive father.

any male ancestor, esp. the founder of a race, family, or line; progenitor.

a man who exercises paternal care over other persons; paternal protector or provider: a father to the poor.

Above is the online definition of the word Father, a very sterol and somewhat cold description of the word, if you ask me. Yes it is correct but some what cold.

It is only mechanical in its usage, as if a fathers was a job, something you have to do. But anyone who watches the news or reads the paper can tell you all to often, they, the fathers, do not do.

The job, or title of fathers is bestowed upon any male who is able to impregnate a female, it caries with it no value no meaning beyond the mechanics. As most things in this modern society, we have worded and defined our actions in such a way as to no offend others. We do not wish to upset or hurt the fathers who are not performing there parental duty, we wish to limit the harsh words or actions in hopes that our kindness and understanding will convert them to a fatherhood of decency and dignity. But we mustn’t push upon them our understanding of the word father, nor our description of what a father should be….

I, for one, am sick of this politically correct world, a world were the truth is often soften to the point of meaningless. We have made the truth, that is sometimes harsh, a bad thing, in the name of a kinder gentler world. What a load of crap, this is a harsh and often times cruel world, and sometimes the truth hurts.

As many of you know I am taking care of a young man from Cameroon, Africa. He has lived in my house for the past 4 years, he is now 19 and is attending his first year of collage. He has lived in America for a little over 4 years, the first months with his “father” (I use the term lightly).

This man (again, I use the term lightly) was nothing more than a sperm donor, who uses his offspring for a power trip. The years he has lived with me, his “donor” would call, infrequently at best, as a time to yell and degrade his child. He would belittle him and dismiss him in a New York minute. But the power trip for the donor was great and the heart ach of the child even greater.

My task was to care for him, but more importantly to love him, to understand him and to comfort him. Basically it was to provide him everything that his biological father would not.

What, you may ask, brings all this up. Why am I ranting and raving about all this…

A few months ago I posted a blog stating that my boy was going to leave me, that his donor was forcing him to move out of a home that he loved, to become the servant his donor expected him to be. But, thanks to God, it never happened.

As providence would have it, my son, to donors off spring, did miserably on his ACTs, and that one test, take last year, sealed his fate. His scores were, well lets just say, not in the top 10 nor the top 100. Basically, I think he got points for spelling his name correctly. Now please understand that this is not due to a lack of smarts, but rather to a lack of the command of the English language. But be that as it may, him doing poorly on the ACTs saved his life.

As the time drew near for him to move off to slavery, his donor checked online to view the ACT scores. Upon seeing the, well less than good scores, he proceeded to call his child and inform him that he was stupid and lazy, and that he could stay here and be stupid and lazy.

It is true that God works in mysterious ways, and this is one of them. Because of a low test score, that fact that he did not want to waste my money on a retake and his donors inability to care for anything but himself, I have kept my son and he has learned a life lesson.

All-be-it a life lesson no child should ever have to learn, that there “father” is a selfish person. That a “father” could so easily give up his own but also a lesson that many more need to learn. That family sometimes in not related by blood, but rather by love.

We figured all was well, his “father” refused to sign for student loans or grants, so we, my sister and I, enrolled him at our own expense, he applied for unsecured loans and all was good, so we thought. But the government seems to accept the PC version of father when it comes to money, and they require his donor to sigh a paper stating that he was not willing to support his own. The end result, his donor refused to sign, and his loans are now in question. We are not sure if he will receive them or not. Once again hurting his own, for his own selfish satisfaction!

All is not lost…

I have yet to give up or give in, my parental instincts are kicking in, even though I have no children of my own. I am ready to fight, to attach and defend what is mine, my boy.  But I know my first responsibility is to my boy, so I am looking to adopt him, if he is willing. Allowing me to insure him and allowing him to receive the loans he needs to gain his education. But with him being a green card American, I am sure there are hurtles that I need to jump and fires I will need to put out before this can happen, not to mention the money needed to do this. But I will do what ever it takes to care for the ones that I love. This is what a Father is, not the words posted at the start of this blog. Love defines fatherhood, sacrifice and commitment, not sperm.

Pray for my son, pray that his heart may be healed…

Paul Sposite - Life Coach I began my career as an instructor. As an instructor there are two basic requirements. You have to know yourself, so you know where you’re drawing your inspiration from. And you have to actively listen to the others, and then respond to the subtext of what they are saying. In learning about myself I started to focus a lot on my students, how they learned, what questions they were asking and how I could best modify my methods to best serve them. I believe that if you use your real life problems/issues as insights to the issues you need to heal, you’ll grow. From my experience in the classroom, creating curriculum and material to support my training, I developed an interest in how people process information. This interest turned into my interest in Life Coaching.
View all posts by Paul Sposite →
This entry was posted in dad, Family, friendship, growing up, Life, Love, prayer and tagged father, hurt, life lesson, Love, school, words. Bookmark the permalink.