Last night I was reading an article in Townhall magazine about fairness. The basic point was this, liberals love to say things are unfair. It’s a battle cry for any issue that does not agree with their twisted out look on life. I found the article interesting for a few reasons, 1) I agree with the stance the article took 2) It is relevant to this whole issue of health care 3) It ties in to this mess with in the Catholic Church at the moment.

Taking each point, lets look at this:

The article took the stance that life ain’t fair and sometimes being fair is not the best course of action.  For life not being fair, lets just look at some very basic concepts. Were I am born and to whom I am born can have a major impact on my life. If I am lucky to be born to a rich family that loves me and in a safe environment than life was good to me. But if I was born to a poor family with out love and an environment that is hostile, well life was unfair to me. But such is life. We can not control who is born to whom and were (even though Planed Parenthood is trying to). And we can not force a parent to love a child. Life just ain’t fair at times, that’s just the way it is. But fairness in nit just based on location, you can have to people raised in the same area and just as much love from the parents but one is the first born the other is not. Scientific proof states that on average the first born child has an higher IQ than non-first born children. That’s not fair, but not much we can do about it.

Berkeley High School in California wants to eliminate three science teachers positions and use the money to level the playing field form the minority students. This sounds good, they want to use the money to give them more one on one service, to teach them note taking skills and studying skills. Like I said, sounds all good, who could disagree with that idea. Well maybe the three science teachers and the other students who do not receive this “extra” help to get passing grades. Nope the other students must rely on the old fashion way of getting good grades. They have to work hard and study. Studies have shown that one of the major differences between the minority and non-minority students was their drive and habits. So we reward the students who look at their social lives as more important than their study life. This seems extremely unfair to the the students that do the hard work to earn the grades, yet the liberals fail to see this.

So tell me how the students who are not getting the extra help is being treated fairly? If Berkeley is a school of academic excellence, than but its very charter it is not a fair school, it is a school for the high achievers, not the average or below average students.

basic fairness question. Is it fair that some have insurance and others do not? This basic question is the whole issue is summed up in that one question.

So is it fair?

Once again, life ain’t fair. I work hard and have good health care coverage. But I have also been out of work with no insurance and have had insurance that was basically worthless. I never looked at health care coverage as an entitlement or a statement of fairness. All things considered, if health care is a fairness issue, than the privet sector insurance companies should be outlawed. The freedom to choose my own level of coverage means that I can choose to have a greater coverage that others, and in doing so creating an unfair situation.

I do think that the American health system needs to be overhauled, but I do not think that Universal Health is the answer, nor to I think that it is a question of fairness. I do believe that all should have access to health coverage, but we should be allowed the freedom to choose the level we want, with out punishment of taxation. 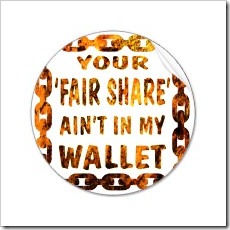 The current state of affairs in the Catholic Church is sad at best. We have a subset of Catholics who use the battle cry of “Fairness” as the tool to chip away at the cornerstone of the Church. They cry unfair concerning male only priesthood and celibacy. They cry unfair in the teaching of sex outside of marriage and same sex union. They look for fairness that fits in to there narrow view of the faith, yet see no unfairness in there actions of persecution of the faithful that do not agree with the theology of the fairness doctrine.

The modern Catholic Church is being duped in to the fairness of things regardless of the history, Traditions or meaning of certain aspects of the faith. They are allowing the liberal point of view and perverted view of the Church and world to cloud there eyes.

Fairness is not about sameness but about access and opportunity. It is fair to give all Catholic the opportunity to serve the Church and God, but not all opportunities are the same. I do not have the drive or the ability to be a world leader in apologetics, I would love to be like Scott Hahn, but do not have the smarts. Is that unfair? should I demand that they lower the bar so that I too can claim to be at the same level as Mr. Hahn? No that would be truly unfair to him and deceitful to not only me but to the public. My gifts and opportunities lie elsewhere with in the Church. Not all are called to serve at the same level or in the same capacity nor should they be. If we were all priest or scalars, who would we be shepherding or teaching?

Fairness is not a right but opportunity is, both in the world and the Church.

So stop whining and do something about it. Educate yourself look for opportunities and take the risks.

Paul Sposite - Life Coach I began my career as an instructor. As an instructor there are two basic requirements. You have to know yourself, so you know where you’re drawing your inspiration from. And you have to actively listen to the others, and then respond to the subtext of what they are saying. In learning about myself I started to focus a lot on my students, how they learned, what questions they were asking and how I could best modify my methods to best serve them. I believe that if you use your real life problems/issues as insights to the issues you need to heal, you’ll grow. From my experience in the classroom, creating curriculum and material to support my training, I developed an interest in how people process information. This interest turned into my interest in Life Coaching.
View all posts by Paul Sposite →
This entry was posted in Called by God, catholic, church, Conservative Catholics, education, Freedom, Life, Media, news, social justice and tagged action, actions, affairs, Afghan, American, area, article, aspects, Berkley, BibleGateway, California, Care, catholic, catholics, children, church, concepts, constitution, coverage, differences, doctrine, Educate, entitlement, environment, examples, excellence, faith, fits, Freedom, gifts, Hahn, health, High, history, impact, insurance, Last, leader, Liberals, Life, location, magazine, male, marriage, Mcchrystal, moment, money, needs, Nope, Obama, Once, parent, Paul, peace, persecution, Point, Priest, punishment, pursuit, rights, Romans, romans 15:13, school, science, Scientific, Scott, sector, situation, skills, smarts, spirit, stance, Standoff, statement, students, subset, system, taxation, teachers, theology, Three, times, tool, Townhall, townhall magazine, traditions, universal, Volume, whom, world. Bookmark the permalink.