The Passing of George 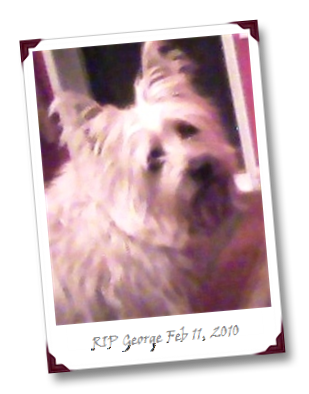 Yesterday was the one month anniversary of the passing of one of my best friends. He was only 8 years old, still in the prime of his life. George, my friends name, was my dog. Now some people think it’s sill how some (like me) act when a pet passes. But I was devastated, it was like the loss of a family member, my heart was broken.

Death is never easy to understand or deal with, but for some reason the passing of George hit me hard. George was not the first death I had to deal with, over the past four years I have had to deal with at least one death per year, and most have been between Thanksgiving and Christmas. From the passing of my mom to my 23 year old nephew and just recently my nieces best friend who was only 20 years old [she had a brain tumor as a baby, like my niece and it returned].

But George was different, his death took its toll on me.

Why would the death of a pet hit me so hard? Over the past month I have thought about that very thing, George is still very much on my mind, I still have dreams of his death.

George loved water, I discovered this fact when I installed a small preformed pond in my back yard, and George would attempt to swim in it, but it was to small for him. George was a Cairn  Terrier like Toto from the Wizard of Oz. My love for my dogs knows no bounds, so I had a larger pond built for him, so he could swim. He was a very happy dog, he loved to go swimming. He looked forward to summer when it was warm enough to swim. In the winter the pond froze over, but not completely, I have fish and turtles in the pond, so I have a bubbler to keep the water moving in the winter. the ice can be thin, but I never concerned myself with it, George never went on the ice in the winter. But this past February he did, and it was his fatal mistake.

I am not sure what happened or how it happened, but I found George floating in the pond were their was no ice. All I can figure is this; we had a lot of new snow fall, the pond was covered in snow and George did not realize he was walking on the pond, fell in and he must have went under the ice and drowned. George was a good swimmer, he would have gotten out if he could have.

I found him shortly after it happened, with in two hours of his death. I was the one who pulled him out. The image remains in my mind, the image of him floating in the water, on his side…..

I think the reason I am having difficulty with his death is because I was the one responsible for him, he was totally dependent on me, I let him down.

All the other deaths I have had to deal with I had no control over but George is different. I keep telling myself, “if only I would have looked for him sooner” or “If only I put a fence up in the winter to keep him out of the pond” and “If only I never built that pond”.

In my mind I know that there was nothing I could do, I built the pond for him because he loved it so much and for years he was one happy dog. I would not change that for a moment. But in my heart I still feel the pain of guilt.

Loss is hard but I know that George enjoyed a very happy life, how many people build a home around their dogs? I did, and I will continue to do so. God created animals for humans, we were given the job of protecting them and loving them. Pets are family and George will be missed.

St. Frances received a lot of prayers for George on February 11 for George. I know the teaching of the Church is dogs do not go to heaven, that they had no souls, but I chose to believe that is because no saint or Pope has ever has a pet like mine. I am sure I will find George in heaven swimming in the pond and waiting for me to come back home.

Make sure to vote in the new poll…. Check out the poll page

Bible Verse of the day

Paul Sposite - Life Coach I began my career as an instructor. As an instructor there are two basic requirements. You have to know yourself, so you know where you’re drawing your inspiration from. And you have to actively listen to the others, and then respond to the subtext of what they are saying. In learning about myself I started to focus a lot on my students, how they learned, what questions they were asking and how I could best modify my methods to best serve them. I believe that if you use your real life problems/issues as insights to the issues you need to heal, you’ll grow. From my experience in the classroom, creating curriculum and material to support my training, I developed an interest in how people process information. This interest turned into my interest in Life Coaching.
View all posts by Paul Sposite →
This entry was posted in catholic, church, death, faith, Family, friendship, Life, Love, prayer and tagged 2 peter 1:4, animals, anniversary, bible, BibleGateway, brain, Cairn, christmas, church, corruption, death, deaths, desires, dogs, dreams, fact, February, fence, Frances, friend, Friends, From, George, guilt, heart, heaven, humans, image, Life, loss, member, moment, month, Nature, Over, pain, Paul, Peter, Pets, pond, Pope, prayers, rights, Saint Francis, sill, souls, st. Francis, Terrier, Through, Toto, tumor, Verse, winter, Wizard, wizard of oz, world, yard. Bookmark the permalink.