Happy Lent! It is the season of giving up what we like, a time to go with out. It is a hard thing for most of us to do. Who really wants to give up that candy bars, or pop? And really why would it make a difference to God; Do we really thing that God looks at us and says “You did not give up candy during Lent of 2008, and you ate meat on a Friday, so you can not enter heaven!”

I don’t think so, but that is not what Lent is all about. If we think it is just giving up something we like, then we are missing the point. It is not about not eating candy or drinking a pop. Lent is not a punishment or a diet plan; it is an act of love, an act of total giving.  But it should not be looked at as something that is sad, or a bother, but rather, as something that is hard but joyous. Lent offers us a time to reflect and grow in our faith. Lent is the preparation time for the Holy of Holy days, Easter, the day of the Risen Lord. But to truly understand Lent, let’s look at the days proceeding to the Crucifixion of Christ. Jesus’ Lent:

So what did Jesus give up, did he decide that he was no longer going to eat meat on Fridays, or no more Coke. I don’t think so. First off Coke was not invented, and secondly, he gave up something greater. We all know he gave His life (and that this is the greatest gift and sacrifice Jesus gave us), but let’s look at what else he gave us, that we may over look. 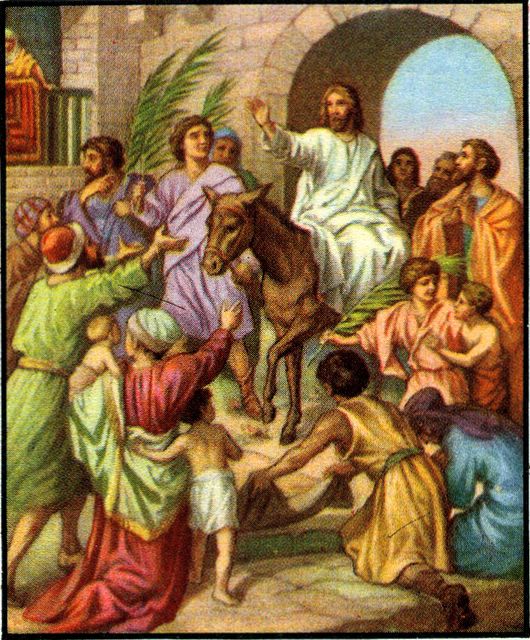 Jesus gave us his Humility, when he entered Jerusalem on a donkey, a lowly animal, not worth much, not something a great leader would ride on. But he, the king of kings, the son of God, entered the great city as a lowly man, one of no great importance. When have you willingly been humble, when have you allowed yourself to be nothing of great importance? Jesus entered Jerusalem with great fan fare, palms where laid out for him on the ground, and waved them at him as He road pass. He was treated as a King, a King who humbled himself, one who could have road the finest of animals, or even been escorted by many important people. But Jesus sacrificed the greatness, the ceremony and all the praise, for the humility of a donkey.

Jesus gave us his Dignity, when he washed the feet of his friends at the last supper.  The act of feet washing was for the servants of the house, not the host or honored guest, and definitely not for the son of God.  When have we ever washed the feet of our friends? Jesus became the servant master, the one who served us, even though he is greater then we will ever be. The humility this took was great, such an act of love, so simple yet so grand.  To wash the dust from our feet, to wipe them dry, he who would save us all, on his knees to wash our feet from our weary travels.  It is our dignity that we hang on to, we are always protecting it from harm, but Jesus free gives of it.

So is a candy bar or a coke really to much to ask? And really are we doing enough? Jesus sacrificed for 40 days in the desert where he had to struggle with hunger, thirst and the temptations of the devil, we have 40 days to lent, in the comfort of our homes and if we slip up and eat something we are not to, really only you and God will know. So really what are we sacrificing?  How are we suffering? God asks very little of us, and as humans we respond with very little. Basically we give what we are asked to, nothing more, and nothing less. So Lent is a time to go that extra mile, Lent allows us to experience a tiny bit of Jesus in the desert, or riding the donkey. So the next time you have a friend over, wash their feet, I don’t mean latterly, but you can humble yourself and give of your dignity in many ways, you can learn t to live as a servant master, not only during Lent, but all year long.

Paul Sposite - Life Coach I began my career as an instructor. As an instructor there are two basic requirements. You have to know yourself, so you know where you’re drawing your inspiration from. And you have to actively listen to the others, and then respond to the subtext of what they are saying. In learning about myself I started to focus a lot on my students, how they learned, what questions they were asking and how I could best modify my methods to best serve them. I believe that if you use your real life problems/issues as insights to the issues you need to heal, you’ll grow. From my experience in the classroom, creating curriculum and material to support my training, I developed an interest in how people process information. This interest turned into my interest in Life Coaching.
View all posts by Paul Sposite →
This entry was posted in Lent and tagged Dignity, God, Humility, Jesus, Lent. Bookmark the permalink.